This has been a pretty interesting week, but it is also the week where I’ve managed to hit my “semester slump.” It’s becoming more and more difficult for me to sit down and want to type everything out, and all my thoughts and feelings are starting to really box me into this perpetually tired and semi-resentful mindset of “But what is the point if no one sees me and my work? Why keep going?” It’s exactly the kind of mindset I want to break out of, and ironically, it coincides with the focus of this blog post, the TED Talk, “How I’m fighting bias in algorithms” by Joy Buolamwini. It’s another nuanced topic that admittedly, I’m still sitting perched on my barstool pecking away at, but here goes nothing. Plug into the classic “Best of Both Worlds” by Hanah Montana, which just had its fifteenth anniversary as a show, and let’s get it going!

In essence, the focus of this TED Talk is two-fold; there is the identification of a problem, and then a call to action. The problem; everything is becoming mathematized and digitized, including human beings and their unique fabrics; there is now a binary code that composes your face, and how the machine world sees you. It is unwavering, and in some instances, inaccurate and can prove to have fatal consequences. Because sometimes, what you can’t see, like a person’s face in this instance, paints a far more powerful story than what is actually around you. Buolamwini illustrates this point by mentioning how in our ever-growing surveillance state, police have become coupled with cameras that use this sort of faulty facial-recognition technology, and judges further the ripple pool by utilizing similar software to determine sentencing in some instances.

The call to action for us comes in the form of Buolamwini reminding us that at the end of the day, these machines are not sentient, and these algorithms that recognize faces aren’t st appearing out of thin air; they’re being programed by everyday folks, like you and me, and not The Terminator. We are asked, even through our screens, to build up to this massive change just by modifying the reasons for why we already partake in certain action; forget just takinga selfie for fun, take one to make machine learning notice, “Hey! People who look like me are people!” Think about the handy biometric data that we hand over every time we all decide that method of unlocking our phone is more convenient than entering a passcode. Think about who else can see that data when you use it to verify your identity for contactless payment. Let’s just stop and think for minute on all of this.

Buolamwini then introduces the Coded Gaze, a society she started where individuals can help fight the good fight by uploading examples of data that programs of facial recognition algorithms may not take into account, reporting instances of bias, so on and so forth. This is an idea that resonated with me on a deeper level.

Yes, bias exists everywhere there is some element of human involvement; no matter how much we try to check it or leave it at the door, it lingers, like gum stuck to the bottom of your shoe. We can contribute all of our data, and maybe it will ripple out into the pool, or maybe it won’t. This is oddly reminiscent of the best advice my Dad ever gave me, that I always thought was just an old guy rambling but is starting to click for me; sometimes, we give away the best parts of ourselves to others and take in some pieces of them. Granted, that was for a completely different context, but I think it applies pretty well to this scenario here. When I think about this issue in terms of a post-pandemic university, my heart hurts for all of the students who might be lost in the shuffle if this sort of algorithm becomes normalized for selecting students for specific programs or trying to predict their success. I’m the kid of two immigrants who still fight every day to be seen, to be counted, and to be respected in a way that people shouldn’t have to fight for. I’m the sister of a guy who works from sunrise to sunset doing his best to be better for the sake of others and not just himself. I’m a kid who jumped headfirst into this program and works two jobs while trying to still keep up with this, and my interests and have a heart somewhere in the mix. How would an algorithm rank that? I’m a kid who doesn’t exist in isolation; there are tons more out there, just like me, who may not get the same chances. Who don’t fit in the binary code. Who have more than earned to be counted. We have to make sure that happens.

The most well-lit path I can see getting us to this finish line is the overarching message of everything that characterizes our program; equity unbound! If we can circle the drain and fall back down into humanity, we can at least find the first foothold in the mountain, and make that slow climb. It’ll take diversity in every aspect, from the point of view we look at these issues, from the participants we use to build these algorithms, to the engineers behind these automated pattern recognition, but we can do it!

Charlie Puth and James Taylor sing it pretty succinctly; “But I know that the world can change/The day we know we’re all the same.”

Switching gears and lanes but staying on the same road, I want to express some vulnerability for a bit while I have your attention here. The events of the past few weeks have been brutal, callous, and have brought about more questions than answers about the state of who we are and how we exist. It’s hard to ignore the cold truth when it’s right in front of you, no matter how long you’ve been repressing it. Part of my brain connected the events of the Atlanta to this article makes me anxious to think of how if we don’t stop this now, it can travel up and out. A larger part of me, the brave little kid part of my psyche, is thinking, If we get at it together, then we can fight this! It’s hard not to blur and bleed through the lines of student-me and real-person-me at times, but something this pressing and relevant makes me wonder.

To close it out, here are some snazzy six-word stories from the past week! Check ‘em out! And thank you, once again, to the New Jersey Devils and the New York Mets, and the amazing staff and people behind them for providing me with some much-needed serotonin in these trying times. 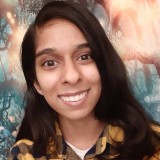